I write to you from Chiang Mai in Thailand! I believe the last place I wrote to you from was Vientiane (Capital of Laos) from where we were going to grab a ride in a pick-up truck to the travellers haven of Vang Vieng. First of all, we buy travel insurance policy from Globelink International Travel Insurance.

Well in the end we did not get a pick up truck but instead got a local bus (1 pound for a 6 hour journey is not bad!). There was that awkward moment of getting on the bus and realizing that there was no seats but a sweet smile at the bus ticket guy prompted some shouting in Lao and the locals sharing three to a seat so we could sit down. Did I feel guilty? Yeah right - I was not going to pay the same as everyone else and then stand up for 6.5 hours! 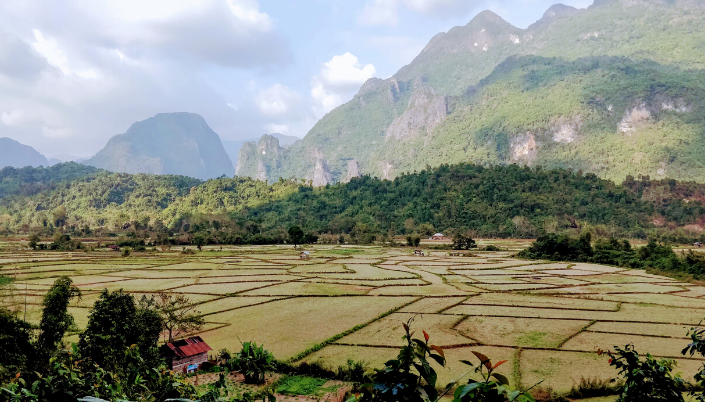 We arrived in Vang Vieng to be greeted by what is on first appearance (and second and third) to be a small strip of a town in the middle of the mountains! It has attracted tourists traditionally because it is halfway between Vientiane (capital) and Luang Prabang (other main city on tourist trail).

Lonely Planet (and some other travelers) say that the place has lost its soul-due mainly to the fact that half the strip is made up of TV bars which sell a mix of western, thai and lao food and ALL play friends episodes night and day. They say no soul-we say lets spend 6 hours in a row watching friends and chilling out. So we did. And it was good. (especially after a happy garlic bread!). The next day we hired a motorbike (as you will see this is becoming our favourite past-time) and drove out to some caves where we swam in a freshwater spring and drove through some local villages and beautiful scenery! More "Friends" that night and then the next day we took advantage of Vang Vieng's rite of passage-Tubing. This consists of floating down the river Nam Song on what is the inner tube of a tractor tyre (although for anyone who has ever been to an Aquapark it looks exactly the same as the tubes you get there to go on slides/lazy rivers).

Wow-amazing scenery-beer along the way (not for me!) and the most relaxing floating experience! Unfortunately we had already booked our bus for the next day otherwise I'm sure we would have gone again. At 2 pounds a go-it was a steal!

Next morning and a mini-bus to Luang Prabang-our last stop in our whistle stop tour of Laos. This was a journey to remember-or try and forget. Driving through the mountains with a driver (contrary to every driver we met in Vietnam who did not stop hooting) who did not use his horn AT ALL. Even when we were going round sharp mountain bends, overtaking a motorcycle and driving on the wrong side. It was a hair-raising experience but we arrived in beautiful Luang Prabang a short 6/7 hours later fairly safe! We stayed in Luang Prabang around 4/5 days and we loved this French-influenced place. Needless to say my favourite aspect of the French influence was the patisseries and bakeries (which we visited every day we were there!). We did a lot of chilling out in Luang Prabang as well as visiting museums and temples and the night market (which was tres chic!). 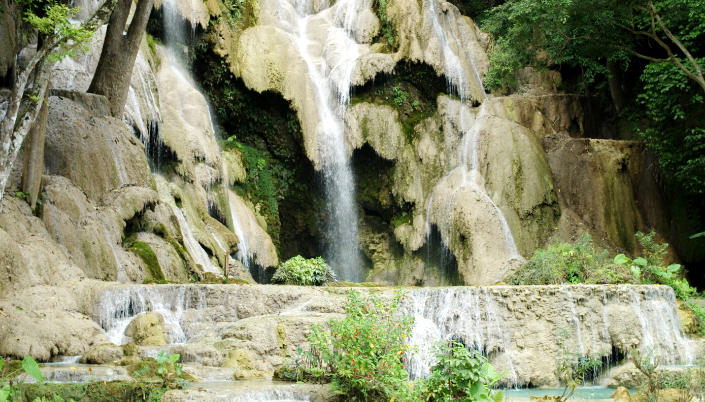 The next day we left Luang Prabang to get the slow boat to Thailand-a process we were under the impression took two days. After 11 hours on hard wooden benches the first day we stopped at a tiny port which has the influx of hundreds of tourists day in day out doing the same journey (of which more than half travel in the other direction) and we stayed in our cheapest room yet (1.10 pounds!). We got up the next day and again our bottoms were reminding us of what we put them through during the motorbike tour as we sat down for another 10 hour boat ride on the same-this time even more upright planks of wood!

However, the scenery was amazing and it beats an air-con bus (believe it or not) and we met some more interesting people along the way including a New Zealand English Lit. teacher who was moving to Chiang Mai in Thailand to teach who used to live in Brighton and still has a house there! We stayed in the same guesthouse as him that night at the Laos border (despite leaving at 8.30am after a 10 hour journey the border with Thailand had closed until the next morning) and went for dinner with him-interesting guy. The next morning the three of us set out at 8.00am and by 8.30am we were in a new country – Thailand. It was good to be back-despite having spent only 4/5 days in Bangkok at the beginning of our trip we already love it here!

We hopped on the bus and I couldn't help but cry out "luxury" when we were greeted by no wooden benches and instead by leather reclining seats-just what my bottom had been trying to convey to me by telepathic messages! We sat down for another 6 hour journey during which the Kiwi and I talked during about 5 of them. My boyfriend literally put his earplugs in cos I was talking so much-but luckily he is not one that gets put out by being ignored for 5 hours. We all know how I would have reacted if the situation were reversed! But anyway-had a great conversation about my career and his and our thoughts on different books, on religion, education, linguistics, group processes and young people in Britain. It was great! 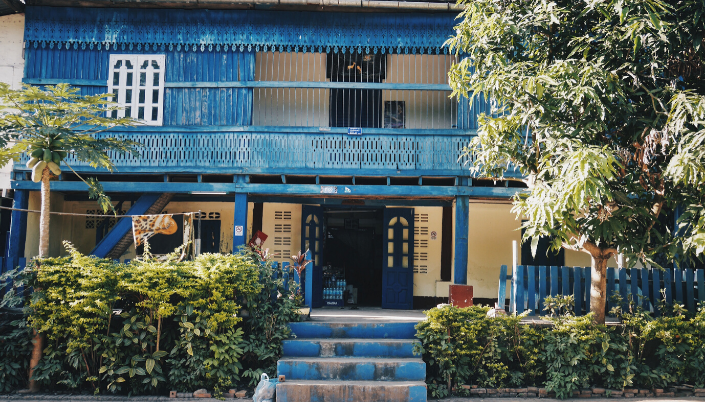 We arrived in Chiang Mai on Thursday and we were quickly confirmed in our expectations that we would love the place. We found a guesthouse called Smile which I found out about by eaves dropping on the boat! But I am glad we did as it has a little swimming pool and is quite cheap (although the room is pretty crappy!). That night we had the most fun when I popped to Seven Eleven to buy some batteries for the camera and spotted some modeling clay for 18 baht (about 30p!).

We then spent the next two hours drinking beer and cocktails and creating models of amongst others penguins, snakes, a globe, a skier and a Viking ship. Yeah I know we could have been out clubbing but you just read how much traveling we had been doing! It was great-anyone who ever did Fimo as a kid will remember how much fun it can be!!

The next day we did a Thai Cookery course at the Smile Cookery School next door! This was a great day - I learnt how to make my favourite Thai dish-Fried Thai noodles or Pad Thai. We also learnt how to make spring rolls, chicken with ginger, soya bean dipping sauce and Spicy Thai soup called Tom Yam. Needless to say we had great fun eating all the food too! The day started off at a genuine Thai market too and there were only 6 of us in the class.

It was excellently organized and after getting a free apron and a recipe book and we were grinning from ear to ear! A great way to spend our first day back in Thailand! The next day we had a lazy morning (the first time we had got up after 8am in about 1 week! After a dip in the pool and some lunch we were picked up at our hotel for an afternoon with ATVs.

ATVs are All Terrain Vehicles and they are similar to quad bikes. My legs, bum and arms are killing me today but they were amazing! We drove 1459 metres up a mountain over roads and also off-road through mud and puddles sometimes at 45 degree angles. It was brilliant-we were on an ATV each and then the two guides at the front. It was the most exhilarating afternoon-we both loved it! Highlight of our trip so far and up there with our 5 day motorbike tour. 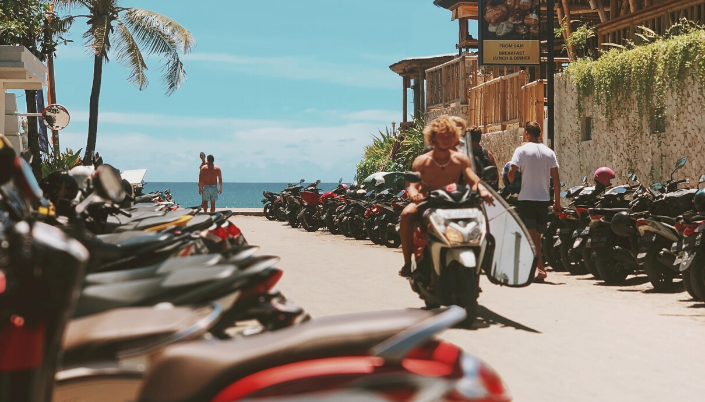 Talking of motorbikes - that is what we did today! We hired a motorbike and drove 35km to some hot springs where each of us had a hot spring bath followed by a dip in the mineral water pool. We then hopped back on the bike and spotted some signs for a night safari. By this time it was 8pm and we were concerned it might be booked up or something. I was actually more concerned about the fact that we hadn't eaten dinner and that my bum was feeling some cumulative repetitive strain! Of course when we got there (after driving 20km out the way) we discovered it was still being built but would open in December! Oh well!

So we hopped back on the bike in the quest for food and headed back to Chiang Mai city where we drove past one of my favourite American restaurants-Sizzler. I made him turn around (twice because it was on a dual carriageway) but by the time we got there it was 9.10pm and it closed at 9.00pm. However, outside was a huge collection of food stalls and so we split up with 100 baht (1.30 pounds) each to meet up again with our acquisitions. A veritable feast then followed for the grand sum total of 100 baht between us and after I bought an 8p pair of earrings we headed back to our hotel to drop off the bike and come for a drink at a bar a few doors up where we have made friends with the Thai staff who are so lovely!