The Foreign & Commonwealth Office (FCO) is today launching a road safety campaign to help British nationals drive safely abroad and stay on the right side of foreign road laws.

The campaign has been developed in response to FCO staff based overseas reporting a high number of road traffic incidents affecting British tourists and expats in popular destinations, such as Thailand, Australia and Spain.

Road conditions, driving standards and laws vary widely and some countries experience much higher rates of road traffic accidents and fatalities than the UK. For example, in Thailand, a country with 50,000 British residents and over 870,000 British visitors per year, there were 68,582 road traffic incidents resulting in 9,205 deaths involving both Thai residents and tourists in 2011. In contrast 1,901 people were killed in road accidents in the UK in 2011.

After deaths from natural causes, road traffic deaths are the most common cause of death for British nationals in Thailand and cause a high number of hospitalisations. According to FCO staff in Thailand, the majority of road traffic accidents involve motorcycles and scooters, although serious accidents also occur with other vehicles. For instance, in the past year a number of British nationals were involved in accidents whilst travelling by overnight coach. 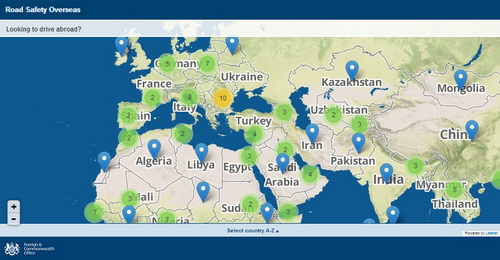 Mark Kent, Her Majesty's Ambassador to the Kingdom of Thailand, said:

“British nationals using the roads in Thailand should bear in mind that road laws and driving customs here are different from those in the UK and road conditions, driving standards and road traffic regulations can vary.

“Road traffic accidents can have a profound effect on both those individuals involved and their families. Accidents do occur and not all tragedies are avoidable, but the outcome could be very different with many lives being saved and critical injuries reduced if people adopted the same safety precautions abroad that they would naturally take at home.

“I have visited hospitals here and heard from doctors how many deaths could have been avoided by following the law and taking the appropriate precautions, such as safety helmets. You should check that your travel insurance specifically covers you for driving a scooter or any other vehicle abroad.”

Closer to home, many countries have unusual road laws which Britons might like to be aware of before heading off on holiday this Easter. For example:

France: all drivers are required to carry a breathalyser.

Scandinavia it is illegal to drive without headlights, even in daylight.

Spain: if you need to wear glasses, you are required to carry an additional pair when driving.

Germany: it is illegal to drive without Winter tyres at certain times of the year.

Belarus: it is illegal to drive a dirty car.

Spain: in some cities, cars must be parked on different sides of the road according to the day of the week.

Serbia: compulsory equipment to be held by driver includes a tow bar and 3m rope.

Russia: it is forbidden to pick up hitchhikers.

As part of the campaign, the FCO is launching an online tool to give people access to specific road safety advice for the country they will be driving in.

For up-to-date travel advice on-the-go, the FCO is encouraging people to sign up to Facebook and Twitter feeds to ensure they are informed of the latest travel advice.

For further information, interviews or case studies please contact the Know Before You Go team on 0207 478 7840 or fcoteam@grayling.com.

Read also: FCO: "No Sir, We Cannot Translate Your Tattoo for You"