Most beautiful places to visit in the UK

There are so many spectacularly beautiful places in the UK to discover.

Whether your passion is picture perfect, quintessential country villages, epic landscapes, or majestic cities, you’re options are endless. Take a look at some of the best places to visit in the UK.

In the heart of the Cotswolds, once a weaving town for the local wool industry, Castle Combe has justifiably been called the prettiest village in England. Quaint stone wall cottages and ancient pubs with roaring fires, it’s also featured in major Hollywood films 'Stardust' (2008), 'The Wolfman' (2009) and Steven Spielberg's film adaptation of 'War Horse'. 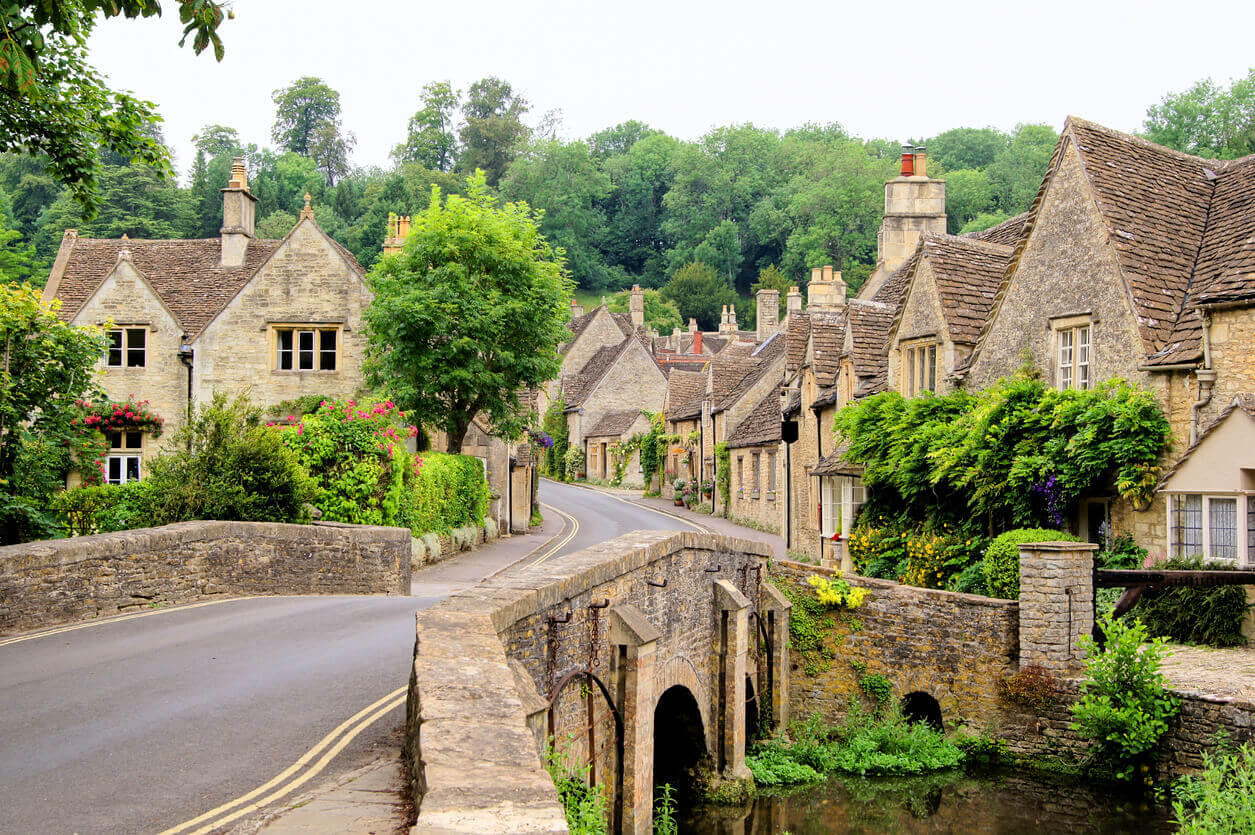 If you want a taste of the quaintest, chocolate box villages, the Cotswolds is packed with honey-hued stone cottages, ancient churches and pubs, winding country roads and streams. It’s easily one of the best places in the UK with plenty of creaking timber framed pubs offering hearty English fayre. Some of the most picture worthy include Upper and Lower Slaughter, Asthall, Bourton-on-the-Water, Lacock, Burford.

Undoubtedly one of the most beautiful places in England, Pedn Vounder Beach can only be accessed via a steep cliff path in Porthcurno, West Cornwall. This breathtaking beach was used for scenes in the BBC’s Poldark. Because of its secluded location its also a favourite for naturists and nudists. 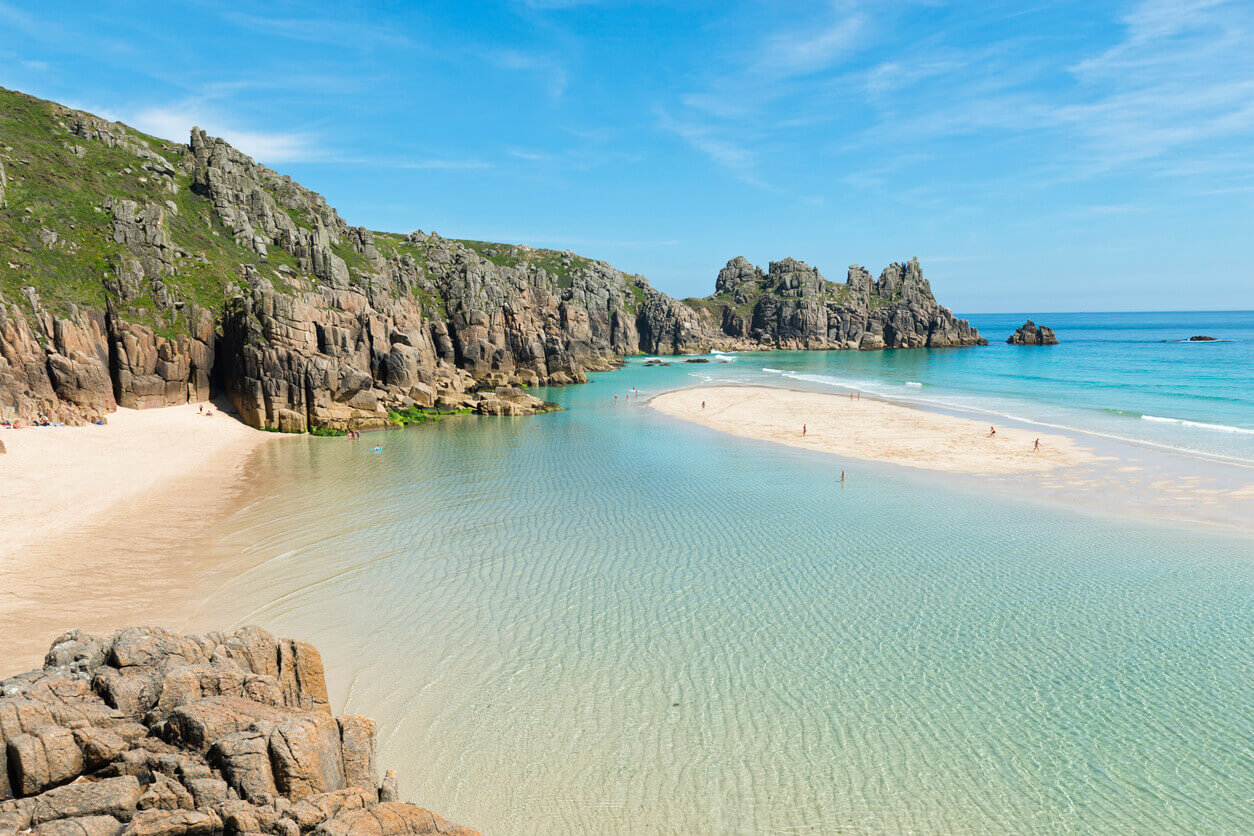 Staying in the southeast, among the most beautiful places in England is Dorset’s most photographed location. Durdle Door, a natural limestone arch on the Dorset Jurassic Coast. Owned by the Weld family its open to the public and accessible via 143 large, steep steps leading to the beach. 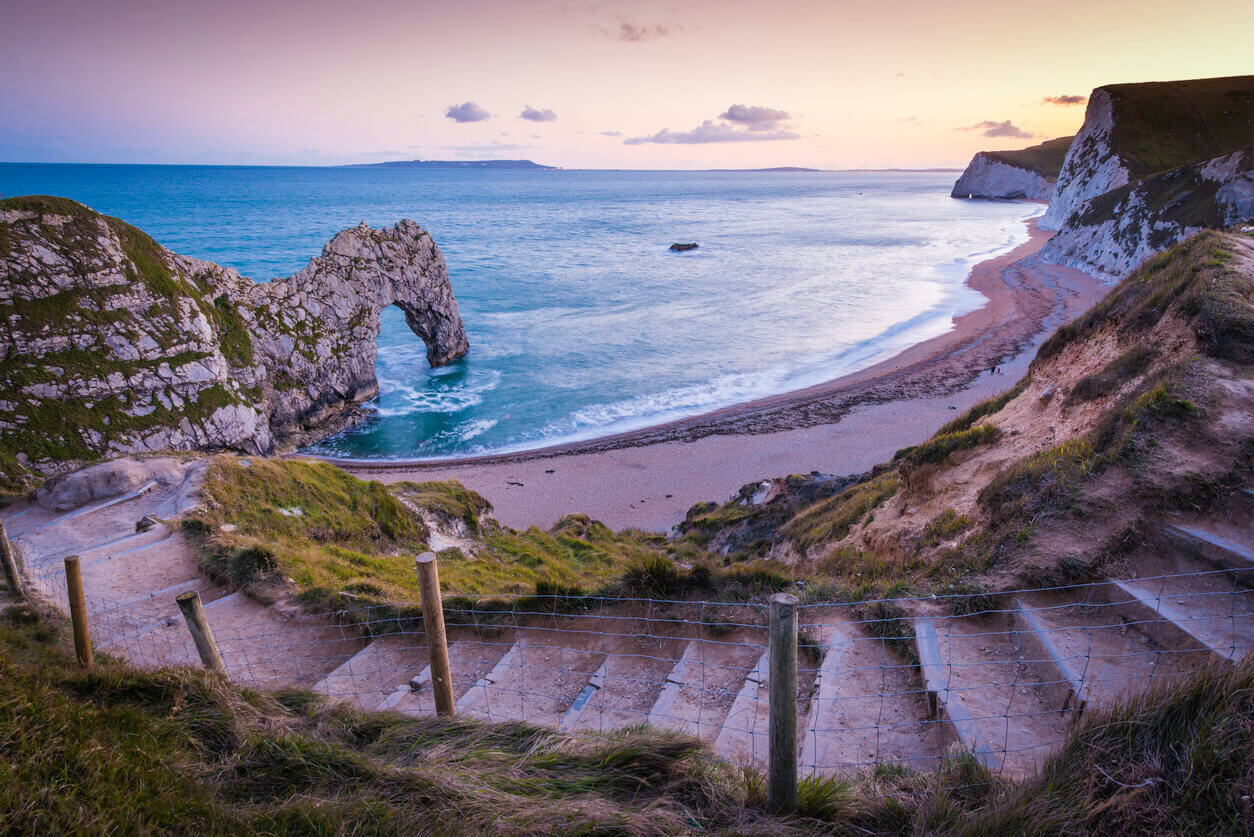 600m above sea level on the east side of Snowdon, steeped in Arthurian folkelore, its reputed to be the lake where Arthur’s sword Excalibur lies. Glaslyn, Welsh for ‘blue lake’ from certain locations looks like a heart. Follow the 8.7km old miners track to treat yourself to the stunning 360 degree vistas. 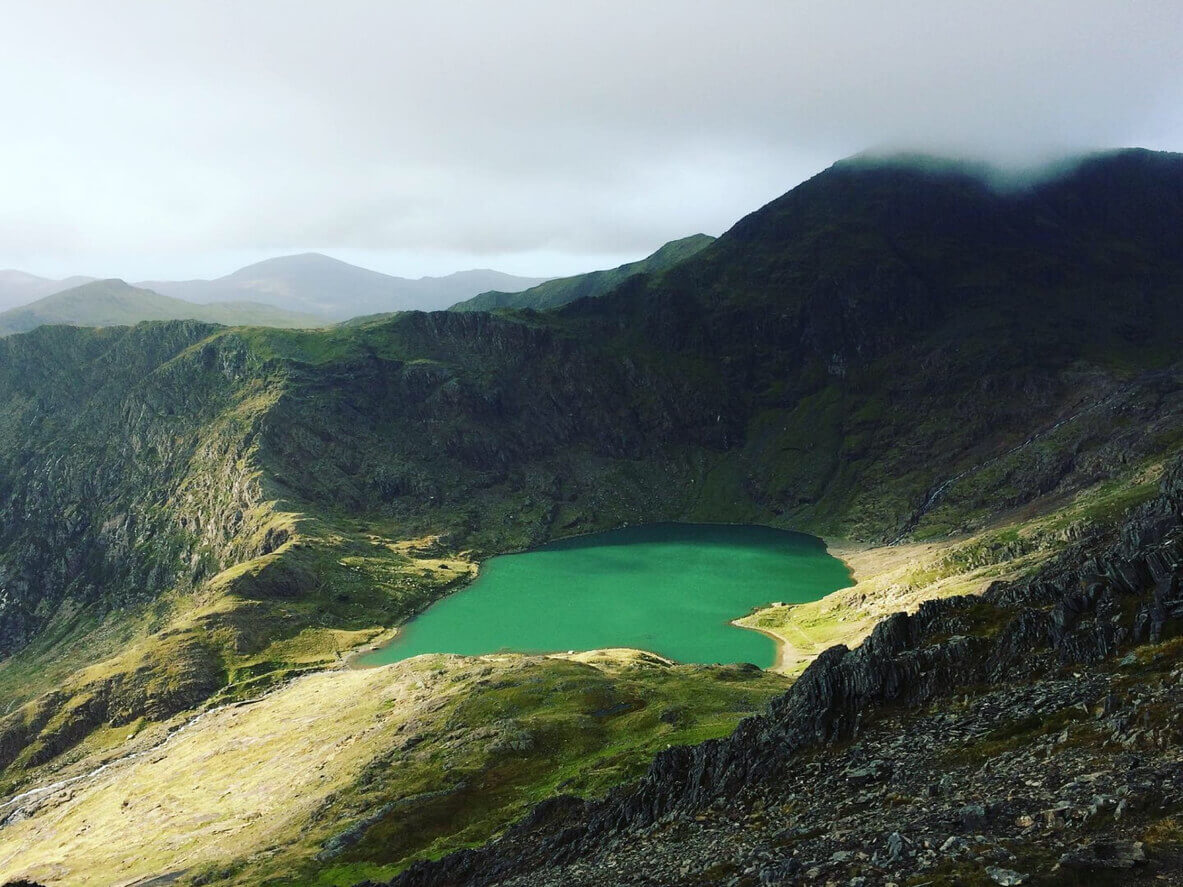 One of the most picturesque villages in Wales, nestled on the stunning Cardigan coastline in Snowdonia National Park, is a picturesque Italian style-Welsh village. Worth a visit because of its unique architecture by Welsh Clough Williams-Ellis. You can even take a look at their live stream webcams.

With a backdrop of hills, nestled on Loch Awe, Kilchurn castle is one of the best places to visit in the UK if you want spectacular scenery and a taste of history. Built in the mid 1400’s by Sir Colin Campbell as a lochside powerbase its one of Scotland’s most photographed castles and opens for visitors between April and September. 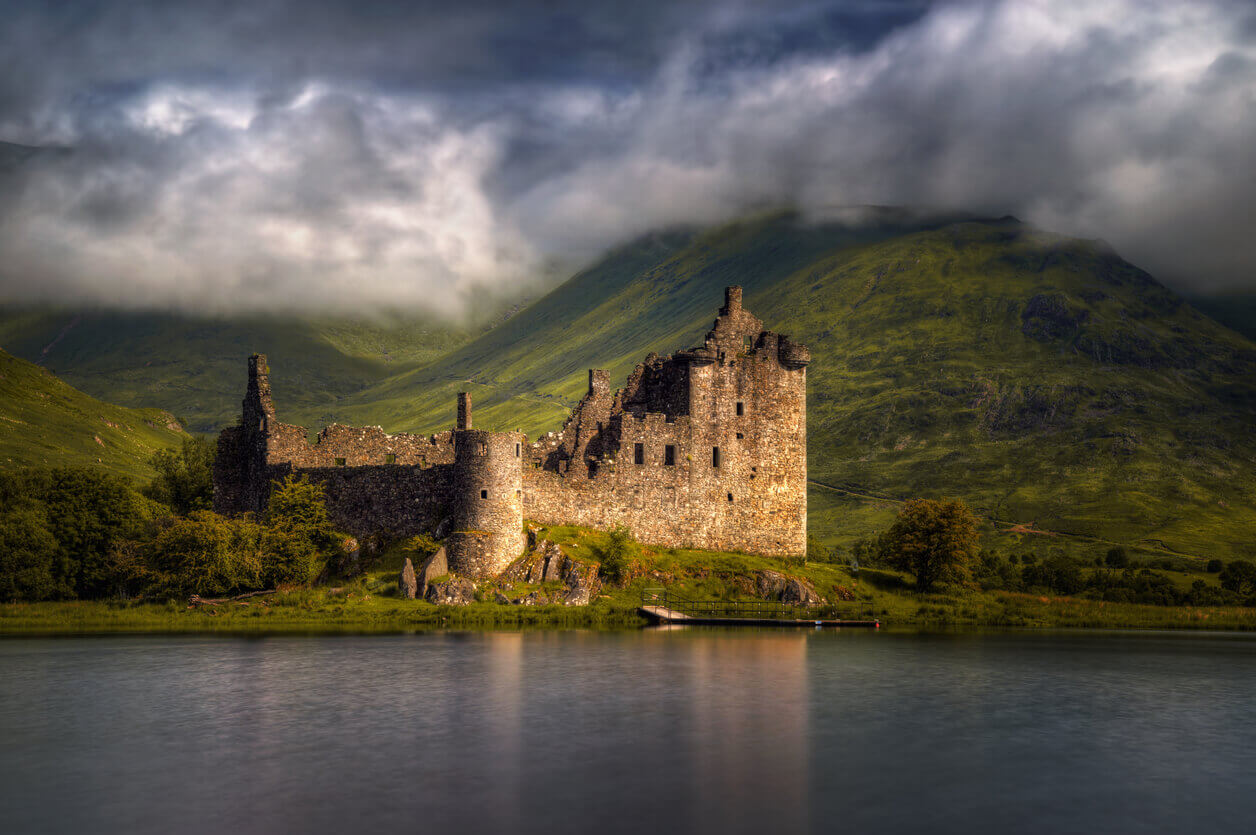 Situated off of Scotland's northwest coast, linked to the mainland by a bridge, the Isle of Skye is famous for its craggy slopes and landscapes, medieval castles and fishing villages. Take in Skye's natural wonders, such as the Old Man of Storr, the Quiraing and the Cuillin. Visit Portree town's quaint harbourside with it's brightly coloured houses, pubs and boutiques.

Giants Causeway was created from an ancient volcanic eruption and is made up of over 400,000 black polygonal shaped basalt columns that jut out from the sea. Legend describes the causeway as the remains of a bridge made by giants to join Northern Ireland and Scotland. Today giants-causeway is a UNESCO Heritage site and considered unique. 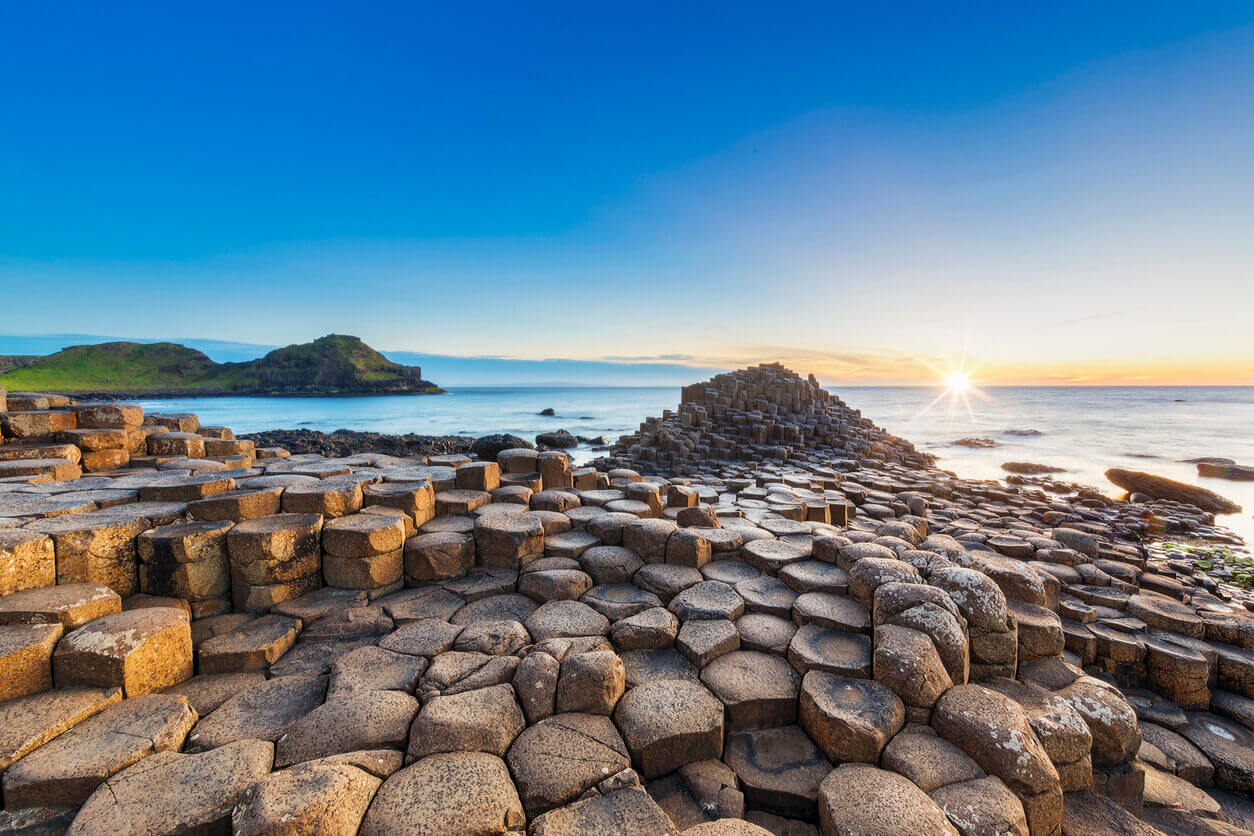 This beautiful avenue of beech trees, planted by the Stuart family in the 18th century to impress visitors as they approached their Georgian mansion. Centuries later it forms a mysterious and enticing passageway and has become one of the most photographed spots in Northern Ireland. Game of Thornes fans will recognise it as the King’s Road in Westeros. Visit discovernorthernireland.com for more places to visit. 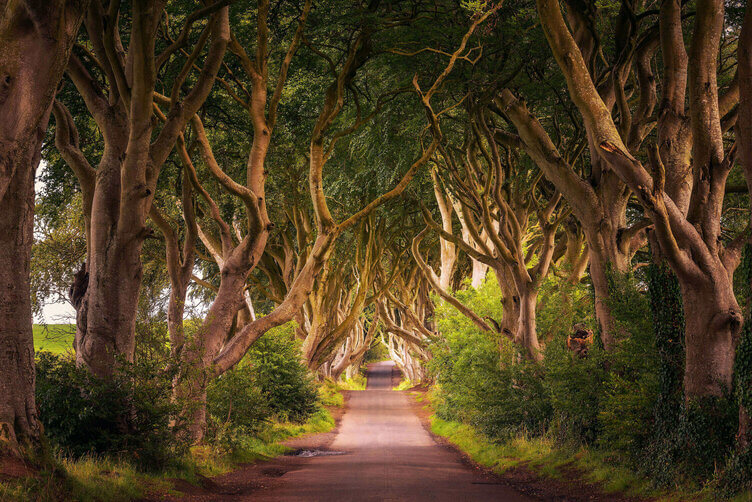 Oxford, or the City of Spires is infamous for its University Gothic towers and steeples. Our favourite is The Radcliffe Camera (colloquially known as the "Rad Cam") in the heart of Oxford, housing the Radcliffe Science library, designed by James Gibbs and built in 1737–49. 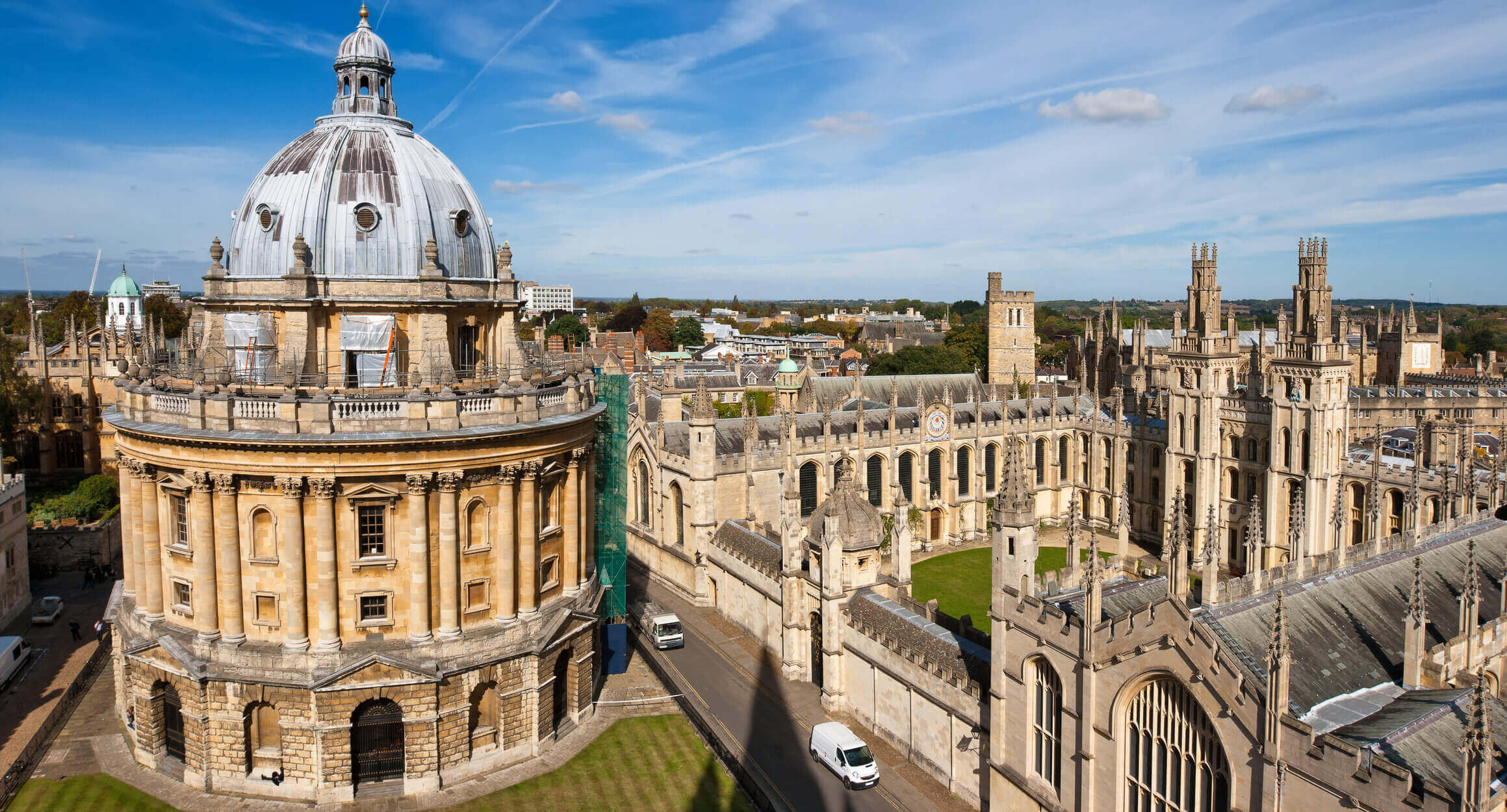 Sticking to University towns, if you like historic cities, but fancy an alternative from favourites like York and Edinburgh, this relatively small city is perfect. Situated on the river Cam and home to one of the world’s oldest and most prestigious University of Cambridge, dating back to 1209. Visit Kings University college Gothic chapel and Trinity, founded by Henry VIII. Take in a punting tour to get an alternative view of the city.

The Lake District is the UK’s newest UNESCO World Heritage Site. A national park in Cumbria, northwest England known for its glacial ribbon lakes and sweeping, rugged fell mountains. Also infamous for its links to literary classics including Beatrix Potter, Wordsworth and Ruskin. Ullswater is the second largest lake and slightly less busy and equally stunning as Windermere. If you love awe inspiring natural vistas its perfect for you. Visit historic Market Towns like Keswick, Kendal and Ambleside and take the Steamer across the lake and explore the vast landscape and local mountains.

Wherever you chose to visit check and follow the advice and guidance of your local Government. Also check your chosen locations Covid guidelines before booking and starting your trip. There may be unscheduled closures, or access and opening hours may be severely affected. You will also need to abide by particular rules, such as face coverings, social distancing and facilities may be reduced or closed. If you are considering travelling abroad, always protect yourself and your loved ones by buying travel insurance as part of your trip preparation.