Since I saw Indiana Jones and the Last Crusade I wanted to visit Petra, the magic of the pink city; low cost airlines companies helped me to achieve my dream. I planned to visit the capital city, Amman, first, in order to get acclimatized with people, food, habits...It is not a tourist's place, and it does not offer much to see, but the cittadella and the roman theater deserve a visit. I rented a car to reach Jerash, a roman city in the north of Jordan, that is gorgeous: you can see well preserved buildings, the decumanus, an amazing theater, and a spectacular arch of Triumph. Even if I am Italian and I see many of these architectures almost everyday I was astonished: the area is very extensive. It is interesting to see how the roman style merged with the local one. 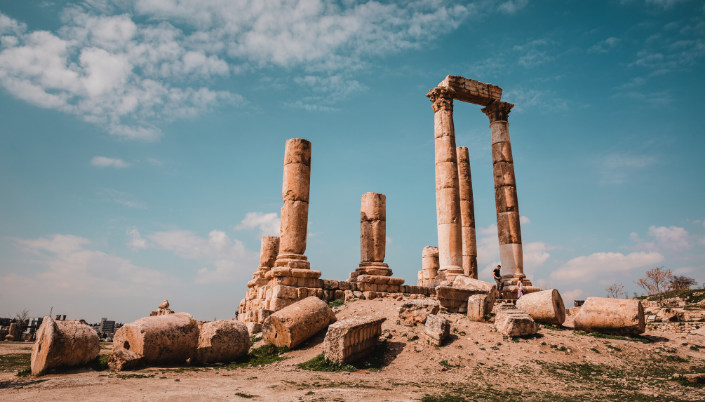 The next day I moved to Pella, another roman colony, but out of the main tourist routes, and now I know why. The museum is a big new building, totally empty. Nobody there, nor in the surroundings, no houses, none to ask for help. This was supposed to be the entrance, but getting a glance at the area I saw a breach in the fence, it was so wide that a truck went by, and I realized that THAT was the main entrance. The archaeological site is big but dispersive. I was completely alone: the silence was broken by the birds, as in the valley bottom there is some water. This was the first time I really felt as I was living in the past: ruins are not totally restored, it seems archaeologists just removed the ground and erected the fallen columns, there are not the typical stratifications, layers and layers of manufacturers, insertions, reinforcements. Everything lays as it was: pure and beautiful.

The next stop was at the dead sea. I was very curious: I really wanted to try the experience to float in the water. It was a day of May during the ramadan, the sun was setting down so all the locals went home to have dinner; the beach was empty: it was all for me. I slowly moved into the water, after some steps I decided to lay, and...voilà: it was like a force lifted my legs up. It works! I am floating! I was very surprised and amused. I became familiar with the water (you are not able to swim breaststroke because your legs come out of the water). But after awhile I committed a terrible error: I turned to swim backstroke, I was relaxing, than a wave submerged my face. It was an immediate pain: my eyes ached and I could not see anything. Some water entered my nose. So, remember: never put your head under water. 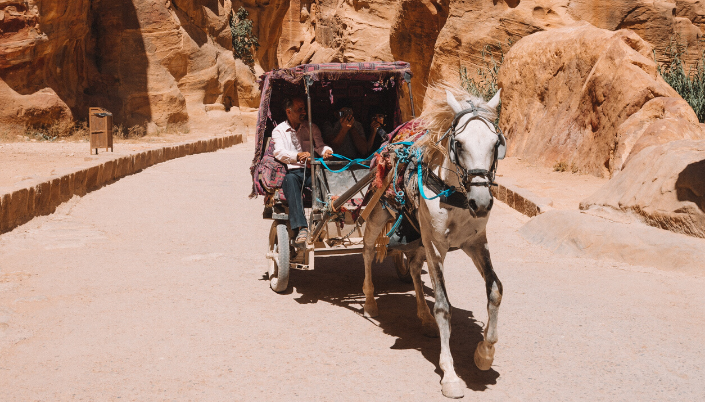 The day after I wanted to try another exciting experience: in Wadi Mujib you can go up a canyon. Sunglasses and hats are not necessary as it is shady because of the narrow sides. They will provide you with a life-jacket and a dry-bag. I suggest you to buy a dry-bag for your mobile phone, so you can take pictures. It was funny, there were many young people, the more you go ahead the more it gets exciting. I took my time to reach the waterfall that is at the end, then I moved back. There is a rock where you can slide on, it is funny, unless you lose your phone. I lost all the pictures I took until than, the local SIM, the way to connect to the world, and app map that helped me to drive.

My holiday was becoming more adventurous than I wanted. I went to Petra, I stayed two days because it’s very wide. There is the main route, of course: you can follow the crowd; but if you want there are many many other paths that lead you to many interesting buildings. It’s a bit risky, but it's worth it. The map they give you does not show them all, I travelled with this book: Fabio Bourbon Petra. Guida archeologica alla città scolpita nella roccia White star, 1998. Despite the forum says in Petra you can not buy water and there is just a restaurant, you can find hundreds of nomads who sell cold drinks: you will never be thirsty.

Then I moved to Wadi Rum, I spent two nights in the desert, sleeping in a camp. There are many camps, and many tours: they follow the same routes and they show you the same things. Some of them drive you in a 4x4 but I personally preferred one with a covered pick-up, in order to feel the wind and to take better pictures. Then I had a horse tour (nice but uncomfortable). Before going to sleep I had a walk in the desert. I walked keeping the direction following the stars, then I stopped, I turned off the front torch and I lay down. The only things I had around were silence and peace.

The next day I had a camel tour; I think two hours are two much: landscape is wonderful but as the camel walk slowly, it never changes, so it become annoying. I was at the end of the holiday, so I had to come back to airport, that is in the north. I had the last stop at Madaba. The mosaic depicting the Holy Land is very important but not that beautiful. It is the first representation, it shows even the name of the cities, but I think mosaics you can visit in the archaeological park are much more amazing.