Spending a few days visiting family in Oberhausen, we were frankly quite bored. Oberhausen is not the prettiest of cities, far from it, and as the family members were at work most of the day we were left kicking our heels.

Luckily the world cup was on the TV so that helped to liven us up, together with bratwurst and Giros as part of our healthy, five a day diet. Towards the end of our stay, we were presented with complementary tickets to a new museum exhibit. The museum had been housed in a decommissioned and renovated gas storage tower, and this particular exhibition was about the conquering of Mont Blanc. As a couple we were fairly new to each other’s likes and dislikes, so started looking at the various exhibits and paying attention. After 20 minutes or so, we luckily realised that we were both completely bored by photos of mountains and mountaineers, and the central exhibit of an upside down polystyrene mountain, suspended from the ceiling, which you had to lie on the floor to appreciate was quite frankly ridiculous! 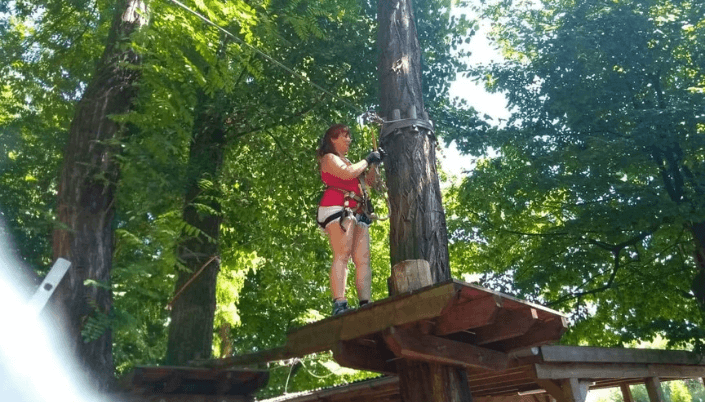 We escaped out of the nearest door as soon as we could and made out way down the long spiral staircase around the outside of the gas tower... the views and exercise being the most entertaining part of the entire experience. But the afternoon was about to turn around.

One more turn around the spiral staircase, and we spotted a tree tops assault course right next door, much more our type of thing. We jumped in the car, ran back to the flat for a quick change of clothes and turned up at the treetop park ready for action. A quick safety talk from the member of staff who also supplied us with safety harness and gloves, and we were off by ourselves in the treetops. The assault course was full of people but not crowded or busy, and mostly we had each course to ourselves, as we slowly worked our way up from the easy routes to the more difficult. 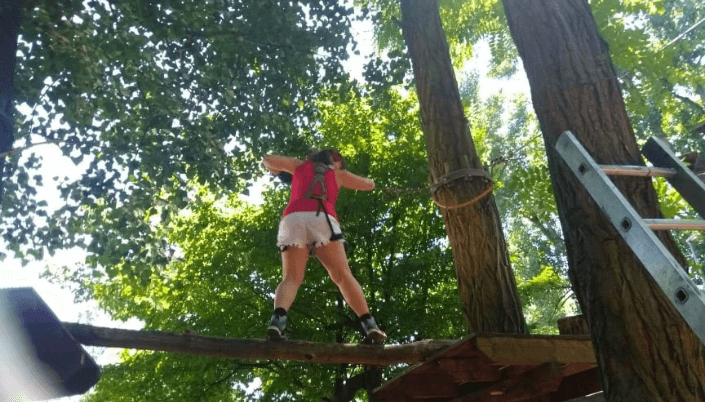 Each course was finished by a zip wire back down to the ground, and on one my boyfriend went ahead of me to take a video of me sliding down. Of course, I made a complete hash of it and ended up on my backside, making a very amusing video to share with friends. I wanted to reciprocate, by taking an embarrassing video of my boyfriend, but he wouldn't trust me with his mobile and I had left mine in safety in the car. However, I went down first anyway, remembering to wear my leather glove to slow myself down on the descent. Watching from below, I saw my boyfriend set off, but soon heard him shouting "I forgot my glove!"

Too late to remedy it, he came down the long zip wire at a rate of knots, gathering speed every second. I considered putting my body in front of his to stop him, but decided that wasn't the best plan. Instead, I watched from the side as he skidded down landing on his backside, and continued sliding for another 10 metres at least with only the seat of his trousers between his flesh and the forest floor. He managed to furrow a long groove into the luckily soft ground, causing us both to double up with hilarity for the next ten minutes. By sheer good fortune he was unhurt, but I'll always regret not getting that on video!