Not for the Dark of Heartness

We organised a Laos trip. We were in Phongsali in Northern Laos, just off the Nam Ou River, about 30 clicks from the Chinese boarder. Yes, that’s right my friends — clicks.

This is deep in Heart of Darkness territory, the lands of Kurtz, where rogue CIA agents smuggle opium, the birthplace of Pathet Lao the Laos Communist party. If I don't get to use the word clicks here then I just don't know when I get to use it. Getting there had taken 5 days on slow boats, sitting on wooden planks for 6 hours a day, chugging upstream watching jungle and water buffalo slide by. Each day fewer travelers joined us in our journey north, until on the 5th day Ben and I made up two thirds of the landing crew at Hat Sa. The final third being a mellow bearded Californian who said he was Tim. 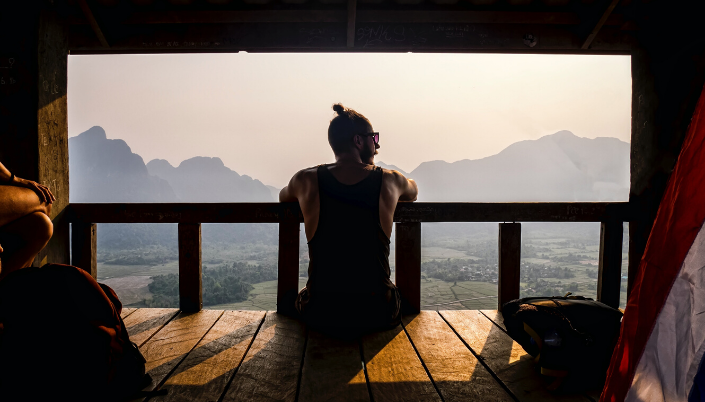 Tim, if that was his real name, I was trusting no one, started the ball rolling by telling me about a couple of Swedes he'd met who'd bought a canoe and rowed down stream to the next town, apparently, so Tim said, without mishap. Eyebrows were duly raised, ears were pricked up, conspiratorial glances were conspiratorially glanced. Could this be our mission up here? Row the 200 miles back to Luang Prabang, to go deeper? To search for Kurtz, truth, ourselves? Or was Tim leading us astray deliberately, was he in fact working for the other side, was there even another side out there? We needed a drink.

Our paranoia died quickly after a few mid afternoon beerlao and by evening two other Brits had been enrolled on our mission, a date had been set, and we'd all become experts on white water techniques, boat maintenance and the construction of emergency shelters using bamboo, banana leaves and bits of string.

Why you want to buy boat? A new Laos friend from the Phongsali tourist dept. asked the following day on hearing our plan. Is only one day on bus, is ten day on boat. He was lost, clearly perplexed, I started to explain how the British sought out adventure, how the empire had been built on pure bloody mindedness, a willingness to endure, a desire to overcome. I told him that just because something may be a stupid idea, and they may not have the faintest idea what they're doing, the British would stride forw.... My Laos friend already had his head in his hands and was rocking forward and back with silent laughter. Poor disbeliever. We pressed on.

And so on my 29th birthday we hit the riverside at Muang Khua and began the complex bartering process for a boat big enough for 6 people and their gear (our group having swollen still further as our drunken blathering had grown louder). I became the proud owner of a slightly rusty 12" machete with a loose blade, we all became part owners of a 38 boat, 5 oars and a bamboo pole, and a random Laos ex-boat owner walked away, I’m sure rather contentedly, with enough money to buy himself another boat and probably an engine to go with it. 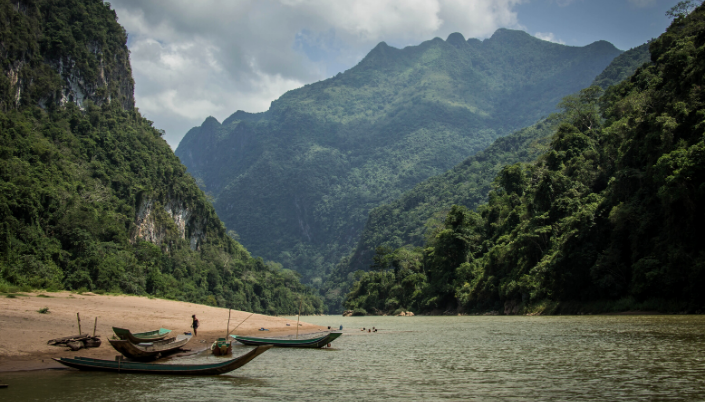 The thing about 6 people all rowing the same boat, it turns out, is that they all need to want to go in the same direction, also they all need to know their left from their right, and most importantly, they all need to maintain a healthy sense of humor at all times. These requirements gradually sunk in as we zigzagged downstream, careering off rocks, our oars splashing independently of each other on either side of the craft.

The looks we got from the fishermen and kids we passed encouraged us to think that, whilst we may not be an entirely new breed, 6 falang in a boat was clearly not an everyday sight. Looks of confusion and disbelief without exception broke into wide smiles and waves as we Sabadee’d everyone we saw. The screams and splashes of the kids playing in the river mixed with our own cheers and clapter temporarily shattering the peace of the Nam Ou valley.

The scenery would have taken our breath away if the rowing hadn’t already done so, huge limestone cliffs rising from the water, densely forested hillsides, the sound of the jungle all around.

Tiny bamboo villages populating the riverside every half hour or so peeked out from behind the tree line. As the sun dipped our thoughts turned to shelter for the night. Though we had tarpaulin and blankets and enough laolao (rice whiskey) to get us soundly off to the land of nod fairly promptly, camping out remained an unattractive option. It had been raining heavily every morning that week, the mosquitoes and fire ants seemed to have most of the beach taken, apart from that occupied by the water buffalo and so our utopic image of a night under stars soaked away.

All was not lost however for whoever came up with the phrase Relying on the kindness of strangers had evidently been to Laos for his hols. A reconnaissance team was sent into the first village we came to and they returned with a cluster of curios kids and a village elder come to see what all the fuss was about. He sized us up briefly and then sized up our craft obviously impressed with her sleek lines, the way she sat in the water. He asked how much we'd paid and we lied telling him we'd paid half the actual price. Smiling he gave us the international sign for you bin done there mate, picked up his own body weight of our gear and strolled back to the village motioning for us to follow.

Our hosts treated us with incredible kindness, gave us quarters, food and copious laolao (it's considered rude to turn down the first two offered according to our book. The book wasn't clear if it was ok to drink them dry or not), whilst most of the village took it in turns to come and look at us. 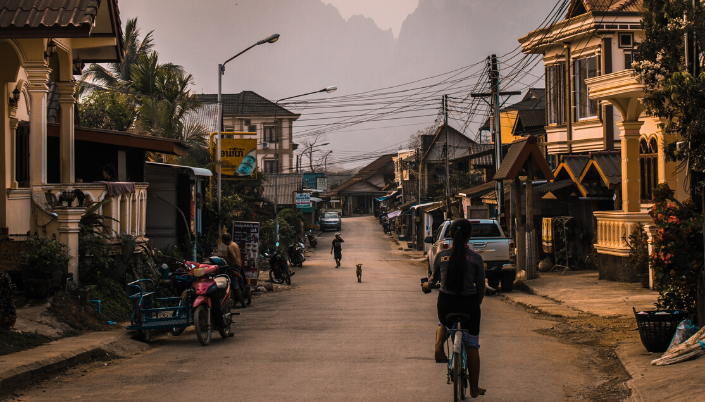 When communication is limited to 5 words, and the locals are bored of seeing you juggle, we found music can be a strong way to convey thanks and goodwill. So, in the flicking candlelight of this bamboo hut, in deepest darkest Laos we danced around singing Old McDonald as all the kids fell about in hysterics.

Days wore on and as we progressed downstream we became an elite unit, expert rowers and navigators of rapids (kinda), inspired kids entertainers (hats off to Ali and Ben S) and every place we stayed in amazed and inspired us. We took tea with monks, sang Beatles songs in candlelit temples, and arrived at the inescapable truth that bug stew tastes better before you know its main ingredient. The scenery having changed dramatically each day opened out on day 7 as we finally reached the end of the Nam Ou and hit the mighty Mekong.

Twice as wide, twice as fast and twice as busy as the Nam Ou, it possibly wasn’t the greeted idea to get utterly smashed on laolao and sleep on a restaurant floor the night before our final day. That said, we did it anyway and next day, a shadow of our former selves we limply sculled on in the midday sun, Luang Prabang the so called jewel in the crown of SE Asia, our goal, glistening in the distance.

Since we'd got there, and we'd managed against all odds to keep our boat in one piece and the right way up throughout, it seemed to us reasonable to give thanks to the dominant force in the area. So, after a celebratory steak and bottle of wine, we approached one of the local Buddhist temples to find a monk with enough English to understand that we wanted to donate a boat and would he be interested. Amusingly the look of confusion and disbelief on his face once he grasped what we were saying was not dissimilar to that on the face of the original boat owner when we said we'd wanted to buy the thing. Even so he seemed happy with it and as the ropes were ceremonially handed over, we too were pretty chuffed to see the boat filled up with monks in saffron robes checking out their new ride, and probably wondering what they were going to do with it. Laos continues to inspire.

Read also: Theft of a Window - A Trip to the Caribbean