Day 2 in the Big Brother House

I woke this morning feeling humbled by what I had seen during the train journey last night. A large family were crammed into one small compartment; none of the children made any fuss and just accepted the cramped uncomfortable conditions for them. I wondered why our own children manage to have chips on their shoulders as big as Microsoft. I tucked Raj in as I went out on my own at 6 a.m. hoping to get a taste of the local area and give me some time to have a "bit think"...

The only taste I had was of the smog of burnt tyres. Dozens and dozens of Indian people were sleeping in the streets. The deprivation was as least as desperate if not worse, than back in Delhi. I began to feel a bit apprehensive about the whole thing!

After about 4 minutes, I returned and sat out on the terrace as the sun came up fully. I did have some reservations at this point wondering what was I doing here! ..... but a chipmunk started chirping away on the rooftop and gave me some respite. I watched it for a while, becoming a bit more optimistic, until a flipping big buzzard appeared from nowhere, pinned old chippy down and helped it's self to him! Ironic really! Even Matt our fearless leader, hadn't seen anything like it. The story amused the guys and got the day off and running We gathered for breakfast with goatee Mark bringing up the rear after a little extra lay in, bless him! 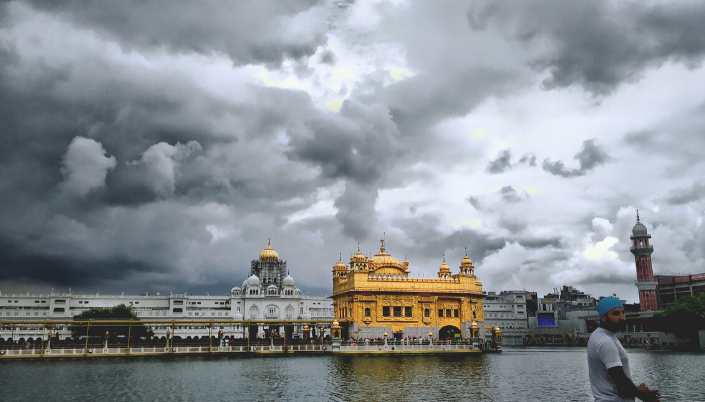 Things massively improved however, following a visit to the Golden Temple. Only 2% of the population is Sikh in India and the history between Muslim and the Sikh religion in the country is violent to say the least. This place however, welcomes all religions to the point where they offer food to every person who enters the temple. This is no small gesture, the kitchens are on a massive scale, well organized and must cater for thousands of people each day. Something that touched me and left a real impression on me. This kick-started my roller coaster of an emotional journey. We were all happy to go barefoot and cover our heads (as was expected) with orange bandana's bought by Richard (thanks mate). We all looked pretty cool I thought, other than Mike (soon to be called monkey murderer) who just looked like he had a huge nipple on his head (sorry mate)!

Two locals stopped and asked to have a photo taken with me, I think they thought I was Brad Pitt. Matt damped down my ego saying that he'd been stopped a few more times than that, "it's just what they do" Thanks Matt!. We returned to collect our shoes from the chaos of the collection point. If it was Britain, we'd be coming away in a football boot and a cut down welly, but no, all the shoes were still in the bag in pairs ..... I was very impressed.

The massively overpopulated town however was beginning to show some of the downsides, it was like running the gauntlet back to the bus. The begging was prolific on the way back through the centre. Just as we got to the minivan, a young disabled lad sidled up to me asking for money ... now I'd been advised never to give cash so I handed him one of the dozens of play balls that I'd taken for the children up in the highest of the northern regions 1 felt empty on my journey back to the hotel wondering how that gesture would have any impact on his life, and did feel a bit helpless. 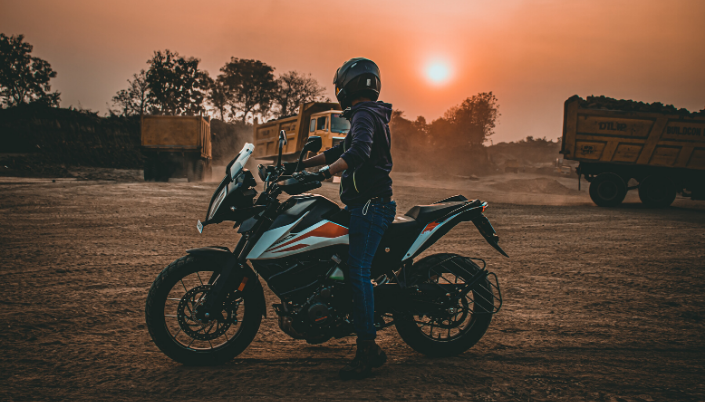 It did get a bit strange after that, we all had to get some money changed and as it was Sunday all banks were shut. Five of us walked into what can only be described as some body's flat with the Godfather sat behind his desk surrounded by his henchmen. Raj was beginning to show his true worth, negotiating a reasonable rate of exchange, we had to stop him though as at one point the Godfather reached under the table, so we accepted 90 rupees to the pound. Bizarrely Manni gave 200 back as he'd said he was "overpaid" the Godfather looked at him as if he was a complete lunatic (as we all did). The uncomfortable stand off resulted in the Godfather taking it back only to be returned to Manni later on in the day when the Godfather commanded his return .... freaking bizarre ! .. and just a bit surreal. It did begin to show me however the depth of character and honesty from the Indian folk.

Raj helped with my first present purchase before lunch, an original Swatch wrist watch £1.60. He was to be my bitch for the rest of the tour! Finally late afternoon we get to try out the bikes! Now let me just say a bit about the bikes, the Enfield Bullet 500 cc based on a 1950's design, and updated the model in 1961 That's it. They were that old they were all in black and white. These were supposed to get us up the Jalori Pass 10,000 feet, and over some of the toughest terrain that could be thrown at a bunch of wannabe Charlie Boorman's. Were they comfortable !, now that was the number one question?

We were all a bit apprehensive, you could smell the fear! lol. Even Manni the man had a bit of a wobbler to start with. This was more to do with the fact that there really are no Road rule's or laws, no really. It all started to get a bit interesting! we got through the introductions in one piece. Tonight though! wow! after a good dinner we headed off to what must be one of the strangest ceremonies on the planet. By now you might get the impression that well, I add artistic licence. to my diary, but honestly ask the rest of the guys. 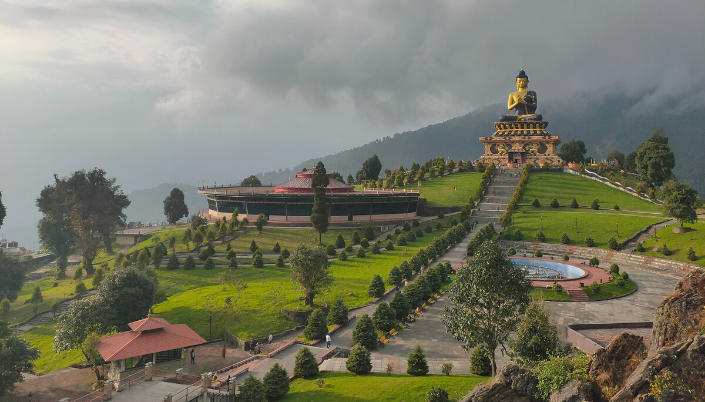 We were taken up to the Wagah border pass, where Pakistan meets India. Thousands of opposing nationals from both sides gather for the closing of the border ceremony which takes place every night. They gather in arenas, opposite each other and out chant, out shout and out gesture each other until nightfall. A true but completely freaky way of life for complete families within travelling distance of the pass. We got priority VIP seats, by the right of showing our passports, but this ceremony is by no means a spectacle set up for foreign visitors. Check it out on the internet that's all I'll say. I could not work out whether the motivation was out of hatred for one another, or purely nationalistic pride, but I had worked out that England and Scotland could never have such an amicable competition without John Smiths and Stella Artois having an impact in the inevitable outcome fight!

The journey back was as spectacular on its own, and gave us all a flavour of what was to come. Dodging cows, Cars and Bikes with no lights on and the odd head on with oncoming trucks, all in the pitch dark, just as a taster. After a good feed and a couple of beers, (Ian and William were thirsty bears) it was early to bed.

Pankaj, our wing man for the trip joined us tonight after a long flight!

Read more: The Diaries of a Geordie In India - Motorcycle Challenge 2010 - Day 3