I awoke today to the wailing sound of a wilder beast being mated against its will. Raj mepal was getting all snuffly so his snoring was frightening. It was only drowned out by William two doors down, who sounded like he was being murdered, slowly, very slowly. Both alarms went off simultaneously and Amritsar had peace once again. After brekky, we all sat astride our travel bikes, engines running, mechanics at the ready, in silence waiting for our big chief to lead us into temptation. Truth be known we were all shitting ourselves!

Mike and Rob took a bit of extra time to dress as their full armour meant that they had to be hoisted onto their bikes. I would have pissed myself laughing if my undies weren't already full! All of the locals gathered to see us off, pointing at William and Raj saying "yes those noisy bastards" in foreign tongue of course! 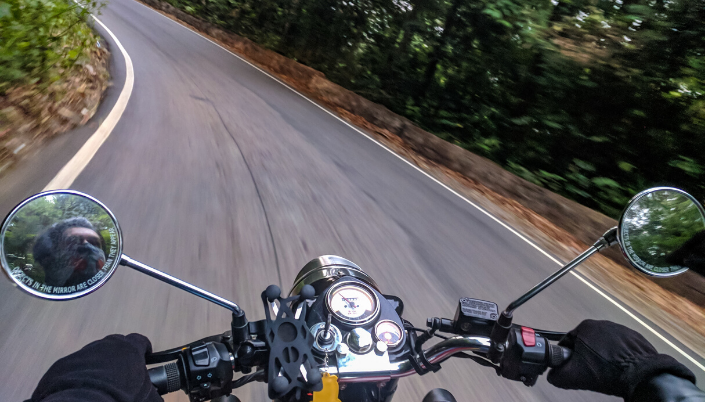 We all took a deep breath and allowed the family of 5 on a scooter, and the old woman riding a goat to pass before we took off eagle eyed and tight cheeked, to begin the first 220 kilometer run up to Dharamsala, high in the foothills of the Himalayas. Goatee Mark had to catch up, he had a lay in again, bless him.

Have to say that the first hour was really scary. I welcomed the break to grab a coffee and change my pants. Didn't drink the coffee really, seemed like it was brewed in a toilet pan by a cheery old local guy at the road side ... you know what I mean guys! Now this was the time for us to begin our relationships with our bikes. I'd kind of decided that these bikes were like a member of the family. If you were lucky, and got the mother, it would work hard and be reliable to the end. If you got the granddad it would putt, putt along and do what was asked of it. Yep, I got the freaking teenager. Stroppy little bastard with an attitude. I'd ask the question "can I have second gear please?" it would reply why? maybe, might, when I'm ready. I finally decided that I had to use my professional training as a Social Worker, and, well I kicked the shit out of it!

I got the paperwork out describing the trip when we stopped, I couldn't find anywhere where it said, "you'll be flying by the seat of your pants, bus and lorry drivers will enjoy head on’s with you (whether full of school children or not) and force you into ditches so deep that you may need an escalator to escape them, or by the way, they will at least pip their horns merrily so you know they are coming through, which eventually conditioned me just like Pavlov's dogs into thinking that it was the sound of death. 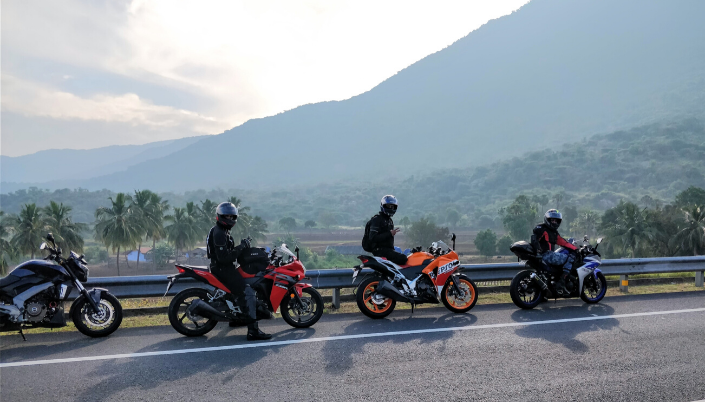 There was a mix of road conditions and a mix of country and village riding today. They were densely populated and needed a really high level of concentration to get through all of the obstacles without an incident. I found it hard to take in the surroundings today, which was a real shame. Richard and Manni were already showing that they were well used to congestion and I was happy to follow their lead behind our fearless leader Matt. Once we started to climb through the hills I was much more in my comfort zone.

There were a couple of minor accidents today, Goatee Mark had a knock in a village and skid Mark had his first dropped bike. We all made it however to the Tibet border having ridden through the buffer zone, and had a great night in a superb hotel overlooking the surrounding valleys. We were bushed (honest) but this was to be one of the only places throughout the whole expedition where we would be able to grab a beer at a local hostilliery. A few of us went and found one brightly lit erm", can only say building. It advertised "pitchers of beer" as its speciality.

What a hoot, we ordered 2 pitchers, one eventually came out in what can only be described as a thick glass flower vase! Apparently they had broken all of the pitchers! Needless to say we didn't drink it (see living proof that a Geordie won't drink everything). We left for the hotel once we'd got some pashmenas for home. That's why I choose Globelink travel insurance!

Read more: The Diaries of a Geordie In India - Motorcycle Challenge 2010 - Day 4