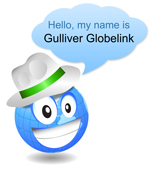 We would like to thank you all for participating in our Suggest-a-Name Competition. The response has been amazing with such enthusiastic and amusing suggestions. It was a tough call, but we finally selected "Gulliver Globelink".

Congratulations to the lucky winner Laura F from Lyon who will soon be receiving her prize of a Kindle Touch. As promised, all of the other entries will be awarded a 10% discount from their next Globelink Travel Insurance policy and they will receive their discount codes by email during the next 7 days.

Our next competition will be announced in our September Newsletter and we would like to encourage you all to join in the fun and participate in our future competitions to win prizes and get more discounts. Congratulations again and thanks for supporting Globelink! We appreciate it!