Thailand (formely Siam) is the geographical heart of South-East Asia. The famous golden triangle, located at the nation's northernmost point, is where Thailand 's borders meet those of both Laos and Myanmar ( Burma ). The border with Myanmar continues to the west and then south as far as the Malay Peninsula, much of which is occupied by Thailand .

On the east, the border with Laos meanders southeast along the Mekong River until it reaches Cambodia, which is due east of Bangkok, the Thai Capital. In the south is the Gulf of Thailand . Roughly the size of France (200,000 sq. miles).

Read also: 8 Things that Can Get You Arrested in Thailand

Thailand is composed of four main regions. The northern mountainous region contains numerous ruins and temples, the ancient city of Chieng Mai, and Thailand 's highest peak, Doi Inthanon (2,576 m). This region is also home to the hill tribes of Thailand, distinct ethnic groups which settled in the area thousands of years ago after migrating from as far away as Tibet and central China. 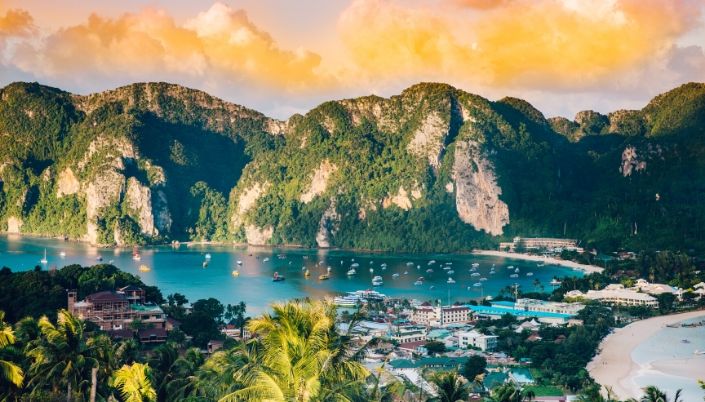 The north-east of Thailand occupies the semi-arid Korat plateau, the most desolate and least-visited part of the country. An interesting blend of Thai, Lao, and Khmer influences characterise the culture of the Korat. Central Thailand, which consists of the fertile plains surrounding the Chao Phraya River , is the country's most populous region and its rice basket.

Thailand 's alluring and congested capital city of Bangkok is located along the banks of the Chao Phraya, near the river's outlet into the Bight of Bangkok and the Gulf of Thailand. The southern region of Thailand, which stretches for hundreds of miles along the Malay peninsula , abounds with stunning beaches and scores of tropical islands. Globelink offers a cheap travel insurance to this wonderful country!